Perry Anderson, a native of Zwolle, moved to DeRidder, Louisiana in 1936. After honorable discharge from the Navy he was in the teaching profession and a businessman. He was married to Marie Cooley and had two sons; Perry W "Skip" III and Kerry Anderson.

This is the oral true account by Perry Anderson in 1995 about his narrow escape from death in WW II.

"When my draft notice was received, I was only 20-years-old. I had no idea what the future held in store for me. The bus took me from DeRidder to Fort Hamburg, Shreveport, Louisiana, where I had to process for induction into service. I was given a choice of army, marines, or the navy. At first I joined the line for the Marines and then decided to step into the line to join the Navy as I though it would be the better choice. On 28 April 1943 I was sent to boot camp at San Diego Training Station in California. Then I was sent to Seattle Naval Station in the state of Washington where I was to await further assignment in the service."

"In Astoria, Oregon, I joined the VC10 Squadron which trained up and down the West Coast. I was assigned to the ship, an escort carrier of the U. S Navy, the USS Gambier Bay which I boarded in San Diego. My ship assignment was in V-2 Division as an aircraft yeoman. My duties were to service the planes and make reports to pilots." 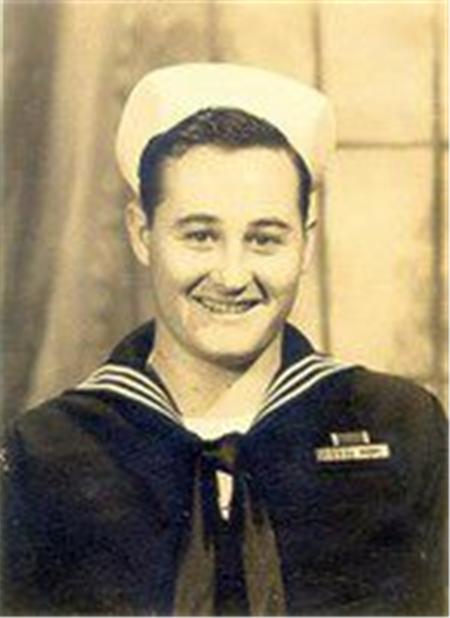 "My first battle was at the Marianas. Guam and Saipan had already been taken from the U.S. When close to the Philippines, each ship had an escort in case a pilot went down in the waters patrolled by Japanese submarines. I was in the battles of Saipan, Tinian, Guam, and Lyte Gulf where the Gambier Bay was sunk on 25 October 1944. The first hit was at 8:20 a.m. Until we sank, we were being hit every other minute. At 8:45 a.m. our ship was hit on both sides by enemy fire."

"The order to "Abandon Ship” came at 8:50 a.m. With shipmates dead or dying and many trapped on board, it was a heart-wrenching sight to see when the order came to Abandon. That’s when we had to slide by ropes down the side of the ship into the water. All the while our hands were stinging and burning from the friction of the rope. Until I could locate a life boat, my life preserver kept me afloat. It was the style that was filled with-milk weed kapok. When the strings were pulled, it inflated automatically. While abandoning the ship, the enemy ships in various directions were still firing at us. With men in the water and the USS Gambier Bay sinking, we did not lower our flag to surrender. That would have been disgraceful for our nation and our U.S. Navy."

"Our ship was sunk in the Battle off Samar after helping to turn back a much larger attacking Japanese surface. We had been ambushed by the largest Japanese Naval force ever brought together. Three of our escorts were also sunk. The U.S. aircraft carrier, USS Gambier Bay, in World War II, was the only one to be sunk by naval gunfire."

Though wounded in action, I managed to swim away from the sinking ship. I was one of the survivors on a donut life raft after spending 72 hours in water. It was designed for 72 men, but because of decayed slats the raft had no bottom. Over a two-day period, 1,110 men drifted more than 60 miles in shark-infested waters without food or drinkable water. In the dead of night, with spotlights aglow in waters patrolled by enemy submarines, rescuers from patrol and landing craft placed their own lives in danger to find and rescue the survivors still floating about at sea. We were in the South Pacific near Somalia when what seemed like an eternity, a ship came by looking for survivors. Our exuberance turned to sadness when we were told that the ship was already loaded but that another ship would be by in about an hour. After not having food and water for many hours, I was too weak to climb the rope ladder when I was finally picked up by an LC1.

"After being in water for such a long time, the first thing I did was to remove my clothes to dry them in the sun. About that time a Japanese plane flew over us, so I had to do a quick change of covering my body with clothes. For many years that pair of pants was kept as a souvenir."

"I was then taken to one of the Philippine Islands and put aboard a hospital ship. Then I was taken to New Guinea Naval Hospital. From there I was put on the luxury liner, SS Lurline and shipped to fleet hospital in San Francisco."

Seaman First Class (S1/C) Anderson was discharged June 18, 1945 in New Orleans. He was awarded five battle stars and a purple heart.
After heavy fire by Japanese forces, the USS Gambier Bay was sunk off Samar in the battle of Leyte Gulf on 25 October 1944. She was named for Gambier Bay on Admiralty Island in the Alaska Panhandle. It was the last Kaiser-built carrier and commissioned in 1943. She was an escort "Jeep" carrier with a four hundred foot flight deck that accommodated a squadron consisting of 26 Wildcat fighters and nine TBM's. Her nickname was "Kaiser Coffin." 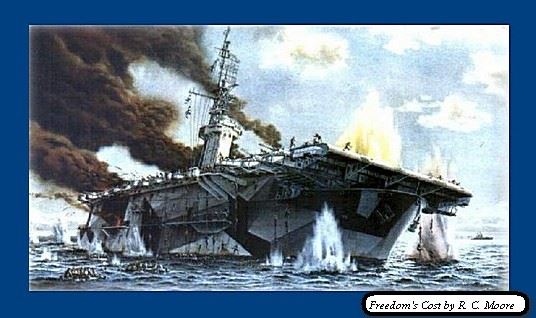