The memory of it all hurt quite deeply - the loss of furniture, the beautiful house, wealth, all possessions. The loss was not by fire or storm but due to the forging of a dictatorship by Adolph Hitler in his quest for Europe, England, and the Soviet Union. Hilda (Haidu) Ashworth was born in Czernowitz, Romania. Her hometown was occupied by the Russians in June, 1940. During the occupation, staples such as bread or milk could not be bought except through the black market. This was a complete reversal from her comfortable lifestyle when she could buy sugar, flour, and cornmeal in 100-pound sacks. Her only thought was to get away from the Russians.

It was by railroad that she found a way to leave. From Romania she went to Gliwice, East Germany (now Poland). The Germans then sent her to a refugee camp near Linz, Austria, in the fall of 1941. Thousands were housed in three big camps. Hilda stayed in an old monastery, three stories high that she remembered being as cold as an ice cellar. After seven months in the camp, she was given a job near Linz as a telephone operator. Although able to converse in six languages, the different dialects often times proved difficult to understand. 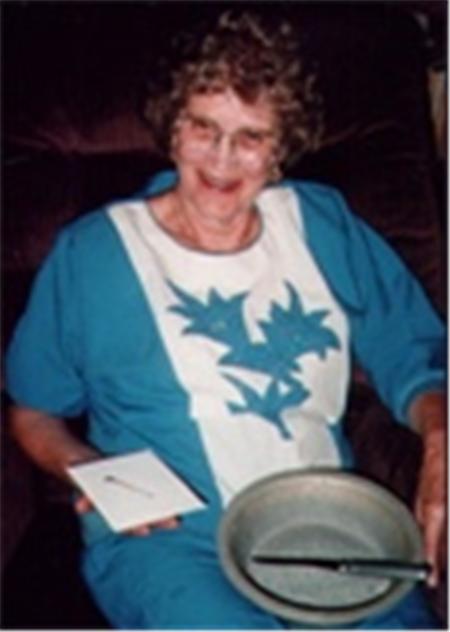 Still alive, Hilda’s father persuaded her to go to Lisa, East Germany, where she lived from 1942 until 1945. On January 20, 1945, the Russians could be seen fighting in the horizon. It was getting too close for comfort, and she knew for the sake of her children that she had to leave. To find a way out of Germany, she decided to bicycle to the railroad depot. But alas, hundreds were waiting for trains in order to get out of the country. Besides, the trains were fully loaded with soldiers, most of them wounded. However, it was her good fortune to encounter German soldiers in a deuce-and-a-half truck who were looking for a hotel to spend the night. She begged them to transfer her and her two babies to get away from the Russians. They assured her they would return for her family as soon as they located their military outfit because they were lost.

Indeed the family was jubilant when the soldiers as promised, showed up at 1 a.m. The soldiers bathed and drank wine while Hilda fixed beds for the soldiers to get some sleep. All ate a hearty breakfast the next morning before departure which was their last good meal for many months.

The start of the incredible journey, took them 100 kilometers to the west. A civilian truck driver agreed to take them the next 50 kilometers further west. Hilda continued to hitch rides until 90 miles away from Berlin. Finally, they were dropped off at a railroad depot where the Red Cross took charge of them. After 14 days, the Russians came, and they had to leave again. During their journey back to Linz, Austria, they stopped to spend the night in Leipzig, Germany, by a railway depot that had been bombed the night before. Hordes of people were crowded into the cellar beneath the depot and were packed together like sardines in a can. She didn’t dare loosen her grip on her children for fear they would be trampled to death.

When they arrived at the depot in Linz, Austria, the siren went off. Hilda and her children ran for their lives; and just as they got into the cellar, a bomb fell by the entrance, and they couldn’t get out. It was a nightmare that she would not forget.

Again, it was good fortune for Hilda when an Austrian lady took her in. But Hilda’s dignity was reduced to zero. Hilda felt degradation and inner turmoil when she found she had to get a louse comb to use on her daughter’s hair. But what more could be expected when many nights were spent sleeping on straw and co-existing in crowded conditions with little food or bread to eat?

After six weeks she was reunited with her sister and brother-in-law and proceeded to rebuild a barracks building that had been bombed. They worked like slaves, mixing and hauling cement to make the place livable. Her hands stayed red with blood.

Finally, a roof was over their heads, but they didn’t have any money and couldn’t buy anything. In order to survive, she and others raided wagons by the railroad tracks to get dark sugar, black flour, and wheat kernels. Ground wheat boiled in water with black sugar added is what kept them alive.

Hilda’s resilience was wearing thin. In November of 1947, she took the train to Salzburg. There she met an Austrian who showed her the way to the border.

She never forgot the drizzly rain and the freshly plowed potato field. She walked and walked for hours and prayed, "Lord be with me.” For many years, she could hear her daughter crying and saying over and over, "Mama let’s go home.” She had the memory of the pitiful sight of her little son stumbling over and over again in the plowed ground until he resembled a muddy shrunken apple doll. She finally saw a light in the distance. But when she arrived at the door and knocked, fear gripped her heart when a border policeman opened the door and said "Koome herein.” (Come in). The man washed her son in the sink and gave him half an apple, the first fruit they had seen in three years. Hilda did not dare be truthful in answering his questions about her background. The guard said he felt sorry for her, but he had to send her back because millions were pleading to go to Germany.

Finally, he agreed to let her go but warned her of the vicious dogs and explained how she was to cross into Germany. She gave a sigh of relief when she finally made it across the border and saw a big sign "FLUCHTLING LAGER” (Refugee Camp).

She remained in the camp seven months before she was transferred to Augsburg, Germany, where she stayed until 1953. Her plight improved to the point she was able to treat herself to a cup of coffee and a piece of torte at a nearby café. It was overcrowded with American soldiers, and it was her good fortune that the proprietor seated her and her friend at the same table with Willie Ashworth from DeRidder, Louisiana. They could not communicate but talked with their hands and feet.

She married Willie in 1955 and after much red tape was approved to come to America. To begin her new life in America Hilda had nothing but her two children, Heinz and Ingrid Faber, her metal bowls used as a refugee, a knife and platters found in the barracks in Linz, a louse comb, and a stocking needle that provided enough income for her survival.

It was after having arrived in DeRidder Hilda learned that the quiet, compassionate, American soldier she had married was of Native American and Portuguese-Moorish descent. Now in her new home, she could again feel a sense of worth for she learned that Willie was a descendant of the one-time richest man in Jefferson County, Texas - Aaron B. Ashworth, owner of 2570 head of cattle.

Hilda is remembered by many as the "Stanley Lady” who distributed products via Stanley parties that were given by ladies throughout the surrounding communities.

During her years as a refugee, the hosery repairs she was able to do with her stocking needle was all that provided income for Hilda Ashworth. Hot water with soap were luxuries she did not have to wash bowl and knife she had found in Austria and carried throughout her years of escaping the Russians in WW II. These items are on display in the War Room Museum in DeRidder, Louisiana.
/QuickLinks.aspx
[]