In 1940, Ray Gibson graduated from Leesville High School and then enrolled in McNeese Junior College. Meanwhile, the war broke out. Ray said that as a boy he was fascinated with the army airplanes flying over Vernon Parish countryside during the Louisiana maneuvers. Ray knew then that the Army Air Corps was the place for him.

Ray did his air training in Texas and Washington State. Ray was promoted to bombardier. Ray and the crew of the "Nasty Habit” flew to Maine, then Newfoundland, then Scotland, and then to their new home about 70 miles north of London.

The Nasty Habit was a B-17 flying fortress with a crew of 10. The pilot, co-pilot, bombardier and the navigator, all officers, were joined by six gunners. Each gunner had a pair of 50 caliber machine guns that could be rotated in various directions. A flying fortress had 50 caliber machine guns on top, bottom, front, rear and both sides. Ray, as bombardier, had a pair of 50 calibers that he could fire from the front of the plane.

The crew named the plan the Nasty Habit because it had a bad habit of getting shot up on most missions. Additionally, the Nasty Habit crash landed twice. During this particular time, one out of three of our planes was shot down. 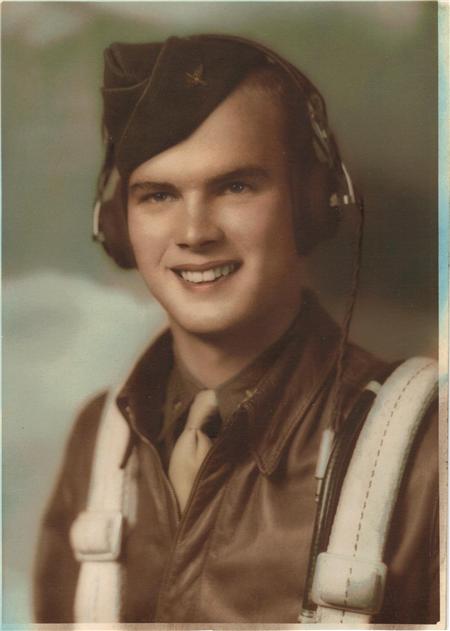 On March 3, 1944, the Nasty Habit's luck ran out. On that day, while attempting to bomb a V2 rocket site in France, heavy flak knocked out the right engine and caused the wing to burst into flames. The pilot ordered everyone out. Ray, who had never parachuted in his life, jumped from the plane. Only five of the crew members were able to jump before the plane exploded.

Vincent Labue once asked Ray, "Did you break anything when you landed?” In a typically modest fashion, Ray responded, "Only my pride.” He landed in a hog pen.

Ray was imprisoned for 395 days. In early 1945, after being forced to march four days in sub-zero temperatures followed by a three-day transport by rail, he was moved to a new prisoner war camp, Stalag V in Moosburg.

Lt. Gibson was awarded four air medals and the POW medal for his service to his country.

Shortly after arriving back home, Ray entered LSU and graduated with a degree in Forestry. Ray worked for the Lutcher Stark Land Company and retired with Boise Cascade. Mr. Gipson served on the DeRidder City Council from 1982 - 1990, where he served as both president and mayor pro-tem.
/QuickLinks.aspx
[]