James L. Bradley, Vienna, MD, brother of Clifford Bradley of DeRidder, LA, said he would never forget the day the 4th Armored Division marched into a Nazi concentration camp in Ohrdruf, Germany. He saw a lone man, who alternately laughed and cried hysterically. Members of his unit saw blood smeared grounds and nude bodies of 19 persons who were shot hours before they arrived.

The GIs who came across this atrocity were combat-weary and hardened. Since the 10 months since D-Day, they had seen countless bodies die, some in gruesome ways. But the blood battles had not prepared them for the horror they saw.

Railroad cars packed with up to 200 prisoners each, were examined and found to contain men, women, and children killed or left to die. Others were clubbed, shot, hanged, starved - and bodies were piled outside crematoria, or lying in heaps in open pits.

According to Bradley, an estimated 300,000 were liquidated at Ohrdruf and over six million Jews died in concentration camps during World War II. He said it makes one sick to see execution blood smeared on the ground. It makes you wonder about your fellow man, about how cruel we could be to each other. 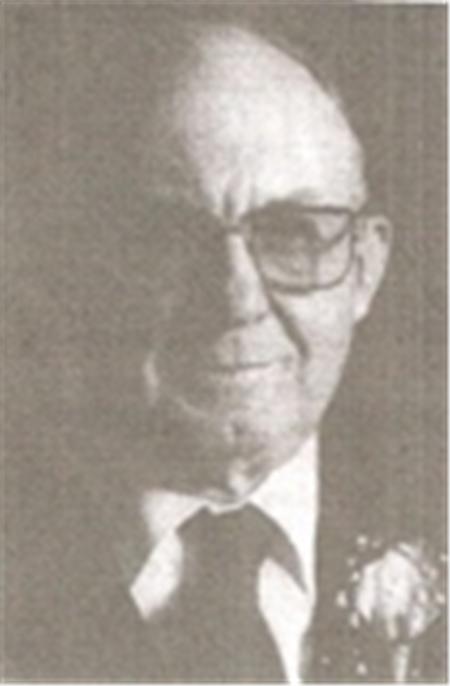 He said he had a camera and took pictures of what he could not erase from his mind. He knew that without pictures who would believe the tales of horrific torture inflicted on mankind. The pictures were given to the U.S. Government as documentation of the atrocities that went on at the camps.

Hitler had ordered that all camp inmates be annihilated or evacuated before the Allies reached them. At every camp it was the same, - the odor so foul that many GIs thought of little other than escaping it. Bradley said the odor could be tasted in the nostrils decades later.

Behind barbed wire or stockade fence, living skeletons lay on stacked sleeping platforms in their barracks, too weak at 50 to 60 pounds to rise and celebrate. "Essen” and wasser” were mumbled by the inmates. Some prisoners, their stomachs shriveled from starvation, suffered horrible deaths after gulping solid food.

After the GIs entered the Ohrdruf concentration camp, the commander of the troops had the burgermeister and his wife from a nearby town brought in for a tour. They denied knowing or smelling anything that had gone on behind barbed wire. They were ordered to bring other villagers and return the next day. VIP’s arrived the next day but the burgermeister and his wife were not among them. They had hanged themselves.

According to Bradley, separating the living from the dead was not easy. When looking at corpses stacked like cordwood, one could see eyes that were huge, and sunken into nearly fleshless skulls. While slowly surveying the stack one could see deep within that there still were eyes that were blinking.

Bradley said his experiences made him thankful for the good life he had after the war.

In 1989 Mr. Bradley was honored in Washington D.C. by the U.S. Holocaust Memorial Council for his participation in the liberation of the concentration camp at Ohrdruf, Germany.


On August 1, 2009, after Ernest Bradley toured the War Room Museum in DeRidder, LA, he provided an account of the true experience of his brother James Leslie in WW II and wrote the following:

"Old memories die hard, especially for those who have been there and done that. Most of the merchant seaman were old and over draft age but had spent there lives at sea and they were volunteers. There were 733 American flag ships lost in WWII and 6000 seamen were also lost at sea due to enemy action and never accounted for.

Altogether 1554 merchant ships, including those of foreign registry were lost with a total of about 9000 sea men lost. Some died in prison camps in Japan and Germany.

I am providing you with Japanese occupation currency for display in your War Room Museum. It was picked up in Manila, Philippine Islands. The occasion was because I had gone to Gen. MacArthur's headquarters to get information about a soldier lost at Clark Field. On the way back as we followed the safe lanes that were marked off, I came to a small building in which I observed several Japanese bodies. I looked in and saw the pile of Japanese currency so I picked up a few pieces of it to bring back home.
Ernest E Bradley
Commander MSTS (Retired)
/QuickLinks.aspx
[]